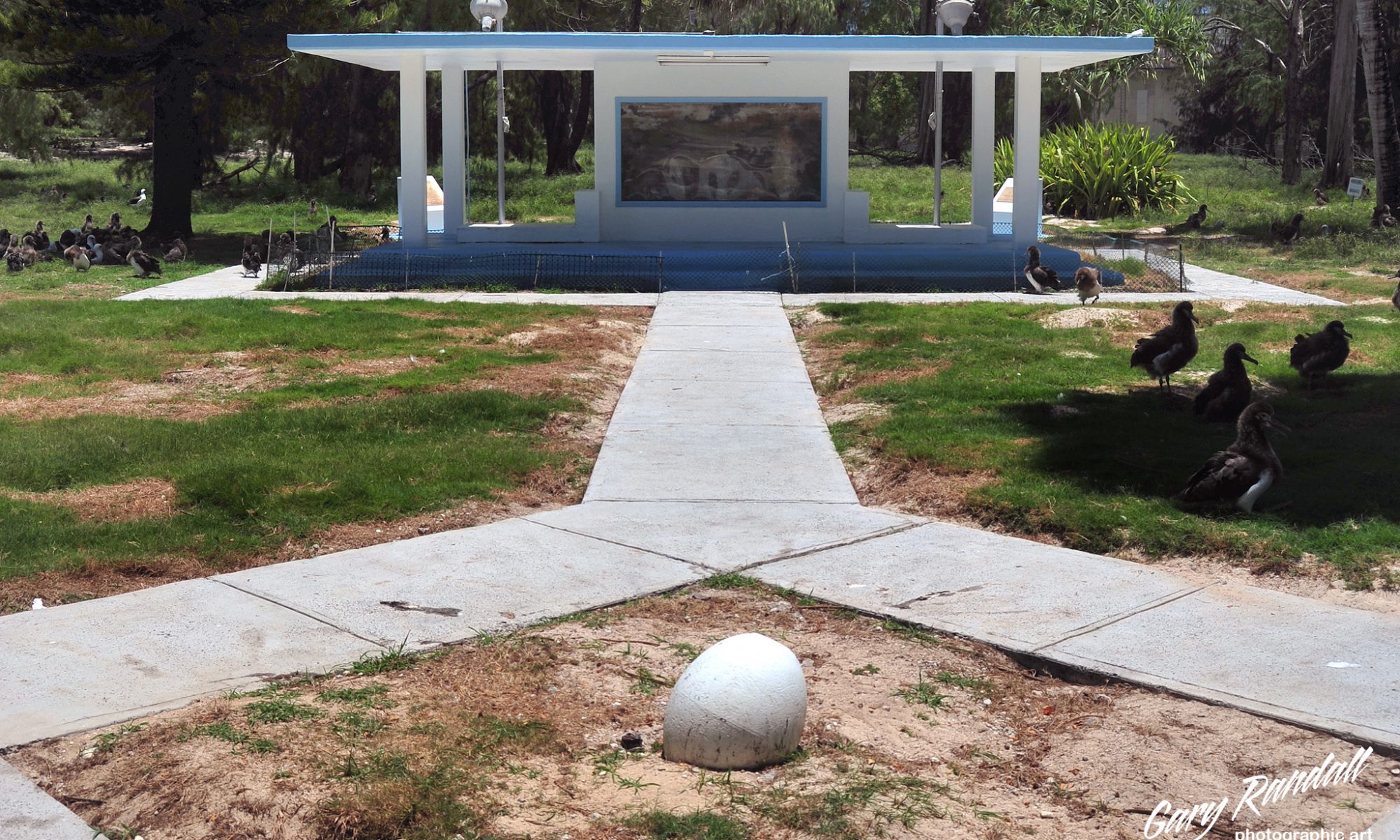 Cmdr. Robert C. Cook, DDS, found a 30-foot mahogany log that had washed up on the beach. Doctor Cook liked carving wood it seems. He also carved the large wooden “Aloha” sign arch that stood at the terminal for years. Many newcomers and many old timers came and went under that arch coming and going from the scheduled Log Flights.

Dr Cook’s statue was revered by all who came and went from Midway. It became a symbol of life there. It became a symbol of Midway. The gooney bird saw many years of posed photos, family picnics, passing horses (bicycles) and simple day to day life at Midway. The statue stood for forty years before  a lack of proper maintenance allowed termites to find their way inside to destroy it from the inside out.

Today the memorial park is still there, located next to the old bowling alley, but our familiar friend the Wooden Gooney Bird has passed. The average lifespan of a gooney bird is about 50 years, give or take. I suppose this one lived a good life before it passed away.

The following is a transcription of an article from the Navy Times from 1972 about the statue.

If you’ve never seen a one-ton albatross, you’ve obviously never been to Midway Island. There, you can find one, claimed by many Navymen to be the “biggest damn gooney bird” in the world, standing 11 feet tall with neck outstretched, head tilted back and beak pointed skyward.

In truth, the gooney is a wood sculpture of a Laysan Albatross carved from a 30-foot mahogany log by a Navy dentist, Lieutenant Commander Robert C. Cook.

Why an 11-foot gooney bird?

It seemed a good subject for his log, explained the doctor, especially in view of how people on the island become so infatuated with the bird, almost to the point that their lives evolve around it as they observe its mixture of graceful flights and antics on landing during eight to nine months of the year when the gooney inhabits Midway.

That, plus the fact that the senior dental officer mentioned nothing about having a fireplace in his quarters.

The finished product stands as a central attraction of a new historical center. It was created recently to commemorate the Battle of Midway fought in June 1942; the project began in the doctor’s backyard and was carved from a single 30-foot log.

The log was cut in half-sections, one section becoming the body, the other the head and neck. After being shaped, the two sections were attached with two steel pins, four feet long. The, upon painting, the carving took on the luster of life, so real, in fact, that many goonies appear quite content nesting in the shade of their newly acquired “big brother” who relentlessly stands in his “sky moo” position, looking very proud and very gooney.